This is my second installment of an intermittent series putting the spotlight on narrow-minded, plutocratic conservative Republican hypocrites who are actively trying to limit our freedoms as progressives either socially or economically. This series, like my previous, unfinished “GREAT PROGRESSIVE VOICES” one, will be intermittent, depending upon the other bits of news or events which may on occasion preempt it. Below are this volume’s bad guys.

TONY PERKINS, President of the Family Research Council
Mr. Perkins grew up in bedrock Christian conservative   nirthern Oklahoma. He received a B.S. degree from ultra-conservative Liberty University in Lynchburg, VA, and later a Master of Public Administration degree from Louisiana State. Adter college, he did a tour with the Marines before settling into a law enforcement job with the Baton Rouge police. He left law enforcement to work first as a reporter and then as a news director for a small, independent Baton Rouge TV station. In 1996, running on a typically conservative platform of smaller government and family values, he won election to the Louisiana State Legislature.

Like many conservatives, once installed in office, Perkins went hog-wild with a social agenda, authoring bills to require public schools to install internet filtering, providing silent prayer in the state’s public schools, creating the first covenant marriage law (in which couples are required by law to seek counseling before filing for divorce), and to authorize the American Historical Preservation Act, whose stated aim is to “prevent censorship of America’s Christian heritage” in public schools. Now that was quite an ambitious authoritarian-tinged agenda for one who professed he wanted to limit the scope of government!

Along the way, Tony Perkins also did what is expected of all good ol’ boy far-right Christian politicians: he developed associations with the National Rifle Association (because Jesus so loves rifles and guns and expects ALL young men to protect their “freedoms” with them); the  American Legion;  and the Christian Coalition (the arch-conservative group founded by Pat Robertson in 1989 to spread conservative beliefs). In 1998, Perkins went even firther: he founded the Louisiana Family Forum, a nonprofit group dedicated to promoting the Christian conservative social agenda. In September, 2003, Perkins became President of the Conservative Christian Family Research Council, which was an offshot of James Dobson’s Focus on the Family. Its radio arm, Family Research Council Radio, has enabled Perkins a national platform from which he reaches many millions with daily brief talks on issues of the day, all of which are from a conservative Christian perspective, of course.

Why do I characterize Tony Perkins as one of our enemies? Let me illustrate with some of his more notable quotes. He has said “We saw in the 1980s the Reagan Revolution break the grip of liberalism on the country. We saw in the 1990s a consevative resurgabce in Congress that broke the liberalism there. Now we stand with the opportunity to see the Supreme Court righted.” GOD FORBID! He may as well have said that conservatism is the only political philosophy this country must follow! No mention is ever made of taking care of the poor, or reversing the outflow of American jobs, or lessening the ever-widening gap between the rich and everyone else in the country. I guess he has no time for those aspects of liberalism. He has also said “Americans will not give their blood and treasure to set up new Islamic fundamentalist regimes. Religious freedom is not just ‘an important element’ of democracy: it is the cornerstone. Religious persecution leads inevitably to political tyranny. 500 years of history confirm this. Americans have not given their lives so that Christians can be put to death.” Mr. Perkins was obviously speaking in defense of the Iraq war, and agaonst the opportunity for peaceful, non-radical Muslims (the majority, by far) to establish mosques and freely practice their religion here . He is therefore endorsing discrimination against followers of Islam under the supposition that the Christian religion is the only one that really matters. Sounds pretty much like the type of religious persecution and political tyranny he claims he is against! The man is full of paradoxes… 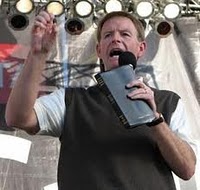 Perkins opposes abortion under any circumstances, even in cases of incest, rape, or if the mother’s life may be endangered by going full term. He denies that humans have played a major role in creating climate change, and has opposed climate change legislation. He is also against all forms of gambling. He opposes gay marriage and gay civil unions. The Southern Poverty Law Center denounced Perkins’ Family Research Council in 2010 as a hate group  for having “pushed false accusations linking gay men to pedophilia.” Yet Perkins carries on, cock-sure that he is right and unable to recognize how extreme his theocratic and authoritarian positions on education, religious freedom (for Christians only), abortion, climate change, gambling, and homosexuals really are. Worse yet, he is so self-righteous he actually believes most Americans share his viewpoints, so he urges all voters to vote only for regressive conservative Republicans.

THAT is why Tony Perkins is our social enemy. 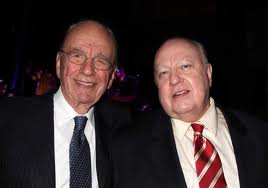 Murdoch, 81, and Ailes, 71, are the absolute worst of the worst when it comes to enemies of fairness, honesty, and journalistic integrity (of which they have absolutely none). They have created a major cable news TV channel which should be more accurately described as the shameful propaganda arm of the now ultra-conservative Republican Party. They claim to be “fair and balanced” in their reporting, but what they always present is a heavily-skewed slant toward the far right on virtually all that they present as “news”. To say that both men lie is to vastly understate what they routinely do, and is far too polite a term to use. 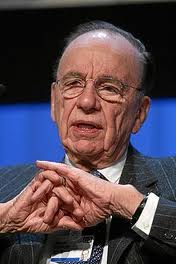 Murdoch was born in Australia but is actually a citizen of the world, in that he owes allegiance to NO country – only corporate profit. He was the only son of a wealthy Australian newspaper magnate, and was raised in a life of luxury and privilege. He owned several Australian and British newspapers, destroying the journalistic integrity of each,  before purchasing a number of  newspapers here. In 1985, he took on American citizenship (relenquishing his Australian one in the process) just so he could meet the requirement that only U.S. citizens can own U.S. television stations. He then purchased the 20th Century Fox movie studio, and, the following year, 6 U.S. television stations. On October 9, 1986, he founded the Fox Broadcasting Company, and the rest is history. He immediately began a push to rival and exen surpass the other 3 major networks of CBS, ABC, and NBC. He successfully outbid them to carry regular MLB and NFL games and began offering programming that met his rivals head-on in the ratings. He opened his news branch to compete with and eventually surpass Ted Turner’s CNN. The Fox “News” Channel it spawned has been the scourge of accurate and responsible cable news reporting ever since. 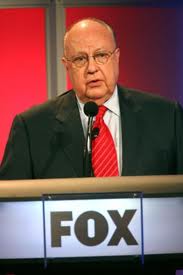 Ailes was a media consultant for former Republican Presidents Richard Nixon, Ronald Reagan, and George H.W. Bush (in fact, he left his first wife to work on the Nixon campaign. It was also his first foray into framing national campaign issues and painting a not-all-that-honest picture of the stiff Dick Nixon as being likeable and popular with voters. This was noted in the book The Selling of the President 1968 by Joe McGinnis). Ailes had prior experience in television as an executive producer for the nationally syndicated Mike Douglas Show. He founded Ailes Communications, Inc. and dabbled in consulting for a number of businesses and politicians. He is widely given credit for coaching Ronald Reagan’s perceived comeback victory in the second debate over challenger Walter Mondale in 1984 (Reagan had severely bungled the first). He began working for NBC and became the first president of its cable-business channel, CNBC. He began developing a new channel for them called America’s Talking,which launched its brief run in 1994. In 1996, Microsoft and NBC partnered-up to form MSNBC, and Ailes, enraged, left the network along with numerous other employees. It was then that Rupert Murdoch scooped him up to run his newly-created news network, which premiered in that same year. Things have never been the same since.

Both ultra-conservative politically, this duo of Murdoch and Ailes set about to push America’s TV news far to the right. They committed themselves to a conservative bias to counter what they both viewed had been a liberal one in all the other news networks. They began lying about the so-called liberal coverage on then-top-cable-news-network CNN. They staffed their commentators with conservatives whose specialty was spin and hyperbole, save for the occasional, isolated, weak-knned “liberal” who was continually ridiculed and made look weak or foolish. Murdoch and Ailes began issuing daily talking points for all their commentators to follow, as has been chronicled so well in the Brave New Films superb documentary Outfoxed: Rupert Murdoch’s War on Journalism. (Incidentally, if you google Brave New Films and go to their site, you will see a listing of more than 20 different film briefs you can view to see hundreds of outright lies Fox has broadcast over the years). When they are not telling bald-faced lies, Fox withholds entire news stories or severely misreports others, often substituting incorrect film clips or wildly overestimating crowd sizes at various right-wing events. It is disgusting and far more blatantly partisan than ANYTHING they ever accused the other networks of!

Accuracy and fact have never been important to either Murdoch or Ailes. Sensationalism, however, has. So have high ratings. As Roger Ailes once put it, “If you have two guys on a stage, and one guy says ‘I have a solution to the Middle East problem,’ and the other guy falls in the orchestra pit, who do you think is going to be on the evening news?” Fox was also instrumental in actively supporting Tea Party rallies which almost derailed health care reform efforts in 2009. They covered this astroturf creation as though it were a real grassroots movement and actively urged support for it to the point where it actually became one! That’s right, Rupert and Roger. Sensationalism before substance. Spectacle before relevancy. Lies and distortion before truth. Well done, Murdoch and Ailes. Joseph Goebbels would be very proud.

Through their unabashed support for far-right, conservative Republican/Tea Party candidates, Rupert Murdoch, Roger Ailes, and Tony Perkins are all pushing for a theocratic oligarchy with no room for a vibrant, free middle class. They are trying to push this country back politically and culturally to the 19th century.

THAT IS WHY THEY ARE ALL OUR ENEMIES.

I am an American Dissident trapped in a country where poor and middle class people are constantly being exploited and lied to by a very rigid and conservative plutocratic elite. I believe in government OF, FOR, and BY the people, not one controlled as it now is by corporations and special interests.
View all posts by jackjodell53 →
This entry was posted in Brave New Films, Commentary, conservative Republicans, Politics, progressives, RoundTree7 Info, Scott Walker, Social Issues and tagged Roger Ailes, Rupert Murdoch, Tony Perkins. Bookmark the permalink.